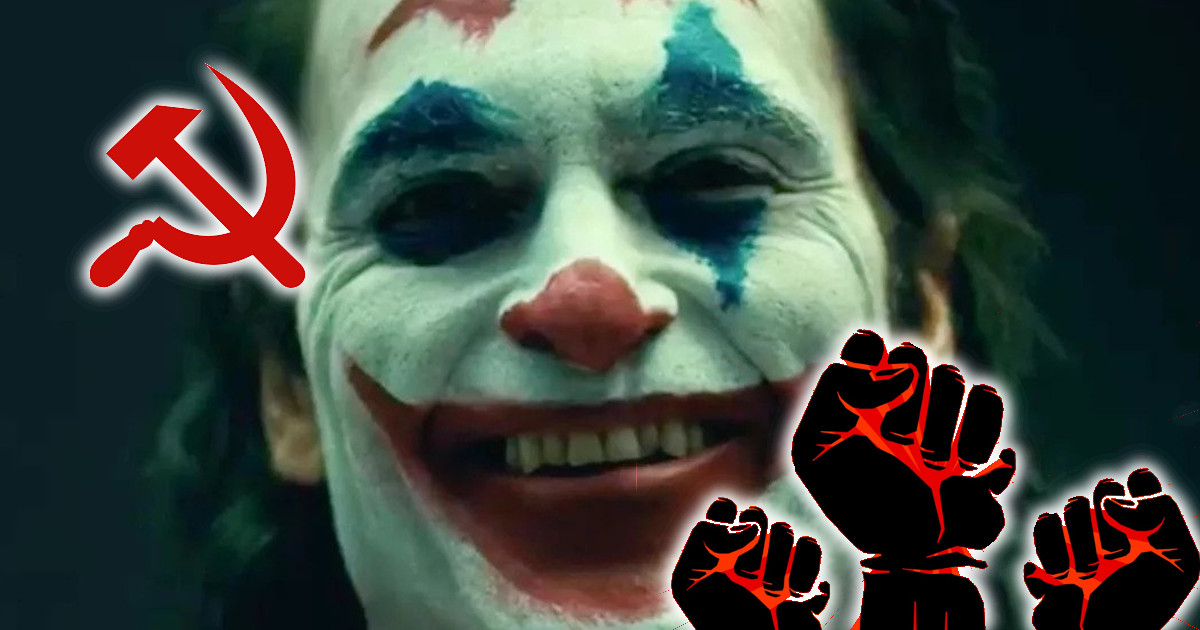 Joker movie was ultimate hit, critics loved it, people loved it. Everyone was blown away by acting and by the story. And righteously so. But somehow everyone is having blind spot on one, I think, major point in the movie, and everyone seems to overlook main message, message that cements current post-ideological capitalist society even further. I’ll try to explain it now, see if you agree with me. If you didn’t watch the movie, I think this will just be gibberish, so skip it.

This movie is neoliberal’s newest and dearest wet dream. It features two distinct traits that I will go over.

First is classical case of anti-capitalist “interpassivity” as Robert Pfaller puts it, but this time it comes in twisted package. You see this “interpassivity” all the time in capitalist art – usually in movies where villains are represented as evil corporations. And what movie is really doing is our anti-capitalist struggle for us; after it ends, viewer is relieved of any (potential) actual actions. We are watching it, probably condemning story narrative and afterwards feeling relaxed as if we attended actual protest. But point is – we are free of guilt and ready to participate in such society. Famous example is certainly “Wall-E” which even mocks viewers when it shows obese people in hovering chairs, people that abandoned planet that got destroyed by one of those corporation. This is how ingrained we are in current system. But in Joker’s case, it was not simply some evil mind, or some corporation we should connect together against – it is showing the struggle of one man against the whole faceless system itself! I am not sure, but I think this is novelty in Hollywood movies, to go this much on interpassivity (maybe “V for Vendetta” comes close) . This might look like a bold move, but it just shows how debilitated and how myopic we are today, without alternatives; as if Thacher’s TINA was sign of things to come.

And although it might seem obvious, let me try to demonstrate why I think Arthur Fleck’s (Joker) struggle is inherently anti-capitalistic and not just against some different daemons. Gotham is presented as dark and dysfunctional city (albeit much more in future than in Arthur’s present) and it is clear that power of state is weak, and any “welfare state” is not there. Inequality is obviously enormous and just so if it is not clear – we have Thomas Wayne (Bruce’s father) in role of both wealthiest and most generous man in there. If there is any good proxy that we are talking about highly neoliberal society, it is the fact that most powerful ones are also most philanthropic (Gates, Soros…), snatching that last role of state to them. This goes even further, as in future, Bruce Wayne’s philanthropy pushes boundaries from just plainly giving money, to being real, proper “warrior” for common people – not even Warren Buffet got to that point. And I am not even going into intertwining of billionaires and their political aspirations, another give-away (should I need to give examples here?). I am pretty sure this is all telling that Gotham is late stage capitalist society, but is Arthur its victim?

You are the crazy one

We don’t know, it is left ambiguous, and for a good reason. Main message of movie, message that no one mentions, is what are you, if you want to be revolutionary and subvert system! Well, clearly – you are crazy, aren’t you!? I still cannot fathom how purely is this note slipped into our subconsciousness. Actually, to be more interesting, due to ambiguity around whether Arthur is victim of system or not, there are two different ways to look at it, but with similar outcomes, both equally terrifying.

Let’s assume that Arthur is just poor, crazy guy due to let’s say, genetic. Yet, he starts revolution! This just sends message that revolutions are started by lunatics. Or, in more realistic scenario, imagine you are following someone that is starting revolution. Do you want to be that guy that follows cuckoos? Do you want to be the one creating chaos on the streets because crazy guy told you so (note that director is not leaving any ambiguity about morality of actions of protesters)? People are leaving cinemas with subconscious memo what to think if someone is rocking the boat – mad as a hatters. Isn’t it beautiful – reactionary governments were trying to deal with this problems for hundreds of years and this movie just solved it:) You probably heard of people fired by Google due to protesting and for poor Chris Small, fired and smeared by Amazon. Can you imagine how many Smalls gave up or lost momentum, due to hesitation, indecision and doubting their own rationality, all caused after this movie. Or supporters of those would-be new protesters doubting sanity of their leaders?

Other option to consider is that Arthur is actually victim of system. And it is not unreasonable to think so. Mental health is one of big signs of late stage capitalism. From dyslexia1, through attention deficit disorders2 to almost proverbial depressions and anxiety. Capitalist society is riddled with those illnesses. So, it is fair to assume that system made Arthur lunatic. And that lunatic is now against its creator. But Arthur does not know, nor it could know what to do after revolution, Arthur even doesn’t know why he is protesting – he is a literal product of the system and as such – enclosed in it. This becomes self-fulfilling prophecy of movie, where class struggle (between Arthur and Wayne) continue on and on and just getting more deep. So, another message for the viewer – “if you feel anxious, if you feel that something needs to be changed, well, sorry – you are part of it, you are product of it, and no – you cannot do anything about it. And yes – you will just make it worse”.

What a truly amazing movie!

1 You don’t need to perfect reading to navigate vast mazes of internet’s social networks – recognition of brands, logos and memes is enough. It was long time ago when Deleuze and Guattari argued in “Anti-Oedipus” that capitalism is profoundly illiterate

2 With constant attention hunt from all of your devices – on your wrist, in your pocket, Alexa on kitchen top, all just for the sake of increasing some “engagement” indexes of big techs… it is really hard to exercise uninterrupted attention with your time constantly divided into micro-slices