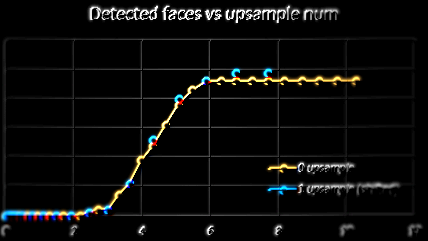 Are you using DLib in production for CNN face detection – read on!

These days, I am working on superb new face recognition application that is supposed to be embedded directly in Nextcloud software. It is far from being done, and I am just helping there, but we do have some grand vision:) I might talk more about it some other day, but for now – just contact me if you find this interesting;)

Under the hood, this FaceRecognition app use DLib library with PHP bindings for DLib. To be more precise, it is using pipeline of several steps, but first and most important is face detection using CNN, as this is most costly step.

Now, it is all fun and games when you want to use DLib internally for your own purposes together on a hardware you know in-and-out and with images you have control over, but it is completely different challenge to do this in generic manner, in a generic app, that should serve various people, where Nextcloud is deployed to various hardware and software environment and where who-knows-what images DLib will be fed with.

For example, you cannot just give 8MP image (3456×2304 for example) to DLib and expect it to work. It will take minutes! to complete and take 10GB of RAM! As not everyone have 10GB of RAM these days, we need to scale image first (preprocessing phase). But for how much? And what is impact of scaling down on detected faces? What is processing time to analyze smaller images – and is it function of width/height or function of image size (image area)? This is exactly questions that this analysis tries to answer!

Let’s just quickly go over what I measured and how.

I didn’t care about difference in image formats (PNG, JPG…), as DLib is internally loading and decoding image to memory array anyway, so I suspected it will have no impact (correct me if I am wrong).

DLib can work both with and without CUDA. Since CUDA case is far forgiving on CPU (around 10x faster, by my rough measurements) and all of the memory is offloaded to GPU, we want to focus here on case when DLib is running on CPU (which I suspect a lot of people is running Nextcloud anyway – from Raspberries, QNAPs to hostings).

We have two programs – one child program (test-program.py) that is actually doing face detection and is supposed to be memory capped, and another program (test-driver.py) that is “driving” test program with various parameters.

To cap memory limits, I used Linux’s ulimits during test-program.py starting (limits are set for address space (resource.RLIMIT_AS) from preexec_fn). To actually determine what are memory limits for a given width/height, I used simple binary search – try with different values for memory limits and see what is minimum value where we don’t get OOM:)

Obviously, for both memory data and processing time data given below, do not read absolute values – they are far too specific for my machine. OK, sure, you might get rough estimates for your setup based on my setup, but that’s it – far more important are readings on performance trends. If it is of any interest, my setup is AMD A10-6790K on host and tests were run from within VBox with 1 CPU.

Complete source code (written in Python) can be found in this Github repository in src/ directory, along with this text:) It should be self-contained (except installing requirements.txt), but since it is fairly small, just go ahead and fiddle with it.Full run take around 1.5 days on my machine. (you have been warned!:)

Before I dive into real perf data, here are some interesting stuff I learned while writing this:

Obviously, there is clear trend towars number of pixel where there is linearity. One thing to check is – what happens if we use images with different rations other than 4:3 (as in this test), like for panoramas or such, does it change used memory? Therefore, I decided to use image area (in megapixels) in following graphs and not simple width or height. That being said, let’s see does content of an image affects used memory and processing time:

I am not sure what these “breaks” in linearity mean – does graph above means that current CNN in DLib has limit to 6GB of RAM, no matter how large image we feed it? I need to test this hypothesis! It may help with defining our model better, but it will certainly not help 95% of the Nextcloud users.

These 2 graphs require a bit of explanation. First graph has number of detected faces for different image sizes, with and without upsampling. But then I figured out that this type of visualization sucks and that it is better to “normalize” image sizes by multiplying image size by 4 (upsampling incresed both width and height by 2, so image size is increased by 4). This is effectively “shifting” orange dots to the right. This is how I ended up with second graph.

So, this curve of detected faces is very interesting – it is almost like tan(x) or some sigmoid (maybe it is??). OK, this group photo has very large amount of very small faces, but what worries me is how DLib is unable to find any face up to some point – only around 4MP (which is 2400x1800px) we get some results. I just hope this is because of choice of image and that ordinary images will have [0-4] faces in it (larger faces, mind you) and that they could be detected with far less that 2400x1800px. I need to conduct some other tests with other images, just to see what is sweet spot for image size with respect to this.

While we are talking about upsampling, let’s see how it affects used memory (remember that same superimposition/shifting (as above) is being done here!):

I am out of nice graphs, so let’s beat a dead horse and see some other scatter plots of other dependent variables:

I would say, there are couple of conclusions we can take from this: